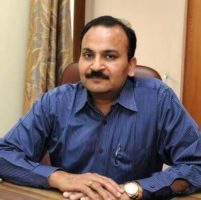 Dr. Vivek Kumar Garg did his initial medical studies at GSVM Medical College in Kanpur, clearing the MBBS exams at first attempt in 2000 in the First Division with honors in Biochemistry and Pharmacology, and subsequently obtaining the MS (General Surgery) postgraduate degree in 1992. Dr. Garg later obtained the M.Ch qualification in Surgical Oncology in 1998 from Cancer Institute (WIA) Foundation in Chennai.

Dr. Garg completed a one-month Observership at Tata Memorial Hospital in Mumbai in 1993, and an 18-month Fellowship in Surgical Oncology at MP Shah Cancer Hospital, Ahmedabad, in 1993-94. He is a member of several medical societies and associations connected with his field of specialization. Over the years, Dr. Garg has chaired sessions, participated in panel discussions and made presentations at numerous scientific meets and conferences at institutions such as KGMC and SGPGI in Lucknow. He regularly delivers lectures on cancer awareness for the general public in Lucknow and surrounding areas, under the aegis of the local chapters of the Indian Medical Association, Rotary Clubs. Dr. Garg has been involved in various cancer-related research studies and some of his contributions have been published in peer-reviewed medical journals.