23-years old Narsingh’s day began as usual, but his day took a very quick and dire turn when he met with a road accident in Barabanki on his way to work.

The accident left him with severe injuries on one side. In medical terms, we could say that he had polytrauma with a fractured femur, the shaft of humerus and pelvic. Which means, nearly all of the bones on one side of his body were severely injured.

He was also diagnosed with pulmonary embolism, a blockage in one of the pulmonary arteries in your lungs; with Acute respiratory distress syndrome (ARDs) with sepsis that caused severe shortness of breath. In most of the patients, this condition is often quite fatal.

Narsingh was earlier admitted to a different hospital but later was shifted to Midland Hospital for his treatment under Ortho care.

Our team of doctors, nurses and paramedics, under the guidance of Dr Rajat Ranjan (Orthopedic Expert), performed various procedures to save Narsingh. 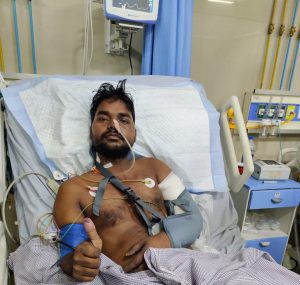 He first underwent a femur surgery via Image control by the closed method – CRIF with PFN. Narsingh was taken off the ventilator, just within a couple of days after the surgery. Narsingh then underwent his second surgery for his Humerus fracture, an injury to the bone of the upper arm that connects the shoulder to the elbow – with Radial Nerve Exploration procedure.

Narsingh’s strong will to survive backed by the quick and effective treatment from the team of doctors at Midland, helped him fight back to the difficult situation he was in.

Today, after over a week from the incident, Narsingh is all set to go back to his home, as advised by Dr B. P. Singh. We are glad that we could be of help to him.

Epilepsy: Myths that surround it

Serving people for over 30 years!

What happens to the body during stress?

How to Handle Mental Burnout